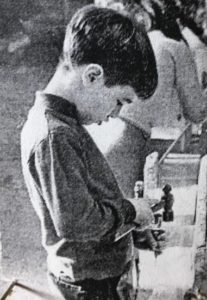 1. What do you love about SRV?
It’s a rather overwhelming question. There are so many aspects of SRV that embody the finest and truest experiences of childhood. As I have written a great deal about SRV over the years, I would like to “cheat” a little and quote from some of those musings—all of which are as true today as they were then:

…Though it is the School in Rose Valley’s 65th anniversary, I could not hope, in the course of a hundred such occasions, to tolerably convey the consequence of my years there.  Let me then confine myself to this: I believe there is a simple, ineffable core of childhood experience which is eternally clamored for—yet scantily dispensed.  It is not the molding or forming so readily provided, but better confined to pottery; rather, it is a catalyzing and confirming of what is already present.  For in the end, our children are known to themselves before they are disclosed to the world, and lives of great pith owe little to the conceit of influence.  For 65 years now, Grace and those who followed her have actualized every parent’s truest yearning.  The effect is incalculably diffusive: beyond ourselves, our children and our children’s children are the beneficiaries.

–Excerpt from an article in the 1995 Parent Bulletin

…For those of us who attended this school, the effect echoes loudly along the corridors of adulthood. We recall the woods and woodshop, the rhymes and rhythms, the dances and discoveries, the arts and artifacts of encouragement. We recall neighborhood friends feigning sickness to stay home, while we feigned health to ensure attendance. We recall the daily scent of exploration. We recall the pleasure of learning, but little of the effort. We recall accomplishing so much ourselves. We recall the weight of insistent kindness. Most of all, we sense that what we have become since then is but the elaboration of seeds well-tended in bygone days.
–Excerpt from a 1997 Swarthmorean article

…I confess I did not discern the uniqueness of SRV from childhood’s vantage. I did not hasten home each day to extol my teacher’s wisdom and warmth. As a child at SRV, I probably never rhapsodized upon the wonder of the woods and woodshop. It was all that I knew. It was my personal status quo. How could I have sensed its rarity? It was only from the reflective perch of young adulthood that I began to untangle the web of influences, discerning the high tensile threads that emanated from SRV. And so I am, needless to say, deeply grateful to my parents for sending me to SRV.  For there are few gifts that span a lifetime, few places that so fully embrace childhood in all its irreducible wholeness and vigor, few gifts that adhere so palpably—like some preternatural Velcro—informing our days in ways that are both overt and subterranean.
–Excerpt from a letter sent to alums for a 2015 gathering

I suppose that, in the barest terms, it’s how it feels when I am at SRV. As a child, as an adult, as a parent: I feel safe, I feel cherished, I feel understood, I feel purposeful and inspired to be my fullest self. Isn’t this what every child, indeed every person craves?

2. Why did you choose SRV for your family?
My son Caleb was born in 1992, while my wife and I were living in Washington DC. It was not long, of course, before I began to dream of giving him the gift that my parents had given me. In 1996 that dream came true. We moved to Swarthmore and Caleb started at SRV in the very same classroom (Maureen and Jill’s) where I started. Caleb has a deep affection for SRV reflective of his own distinct experiences and character, and I have reason to hope that a third generation may come to enjoy the soul’s bounty that is SRV.

3. What would you tell other families who are considering SRV?
There is no greater gift that you could give your child. Because the elementary years are so disproportionately formative–there is simply no better investment in your child’s future. I had the privilege of attending a fine college and graduate school. I had wonderful experiences at both institutions. There is no question, however, that, whatever virtues I possess, whatever joy I claim, owes far more to SRV than to those august institutions.

Having been involved with the school in various capacities for nearly 25 years (including 10 years as a trustee), I see how prospective parents—and even some current parents—struggle to be certain that a place of such joy can also be a place where vigorous learning occurs. I wish that I could find some way to implant that certainty in the minds of prospective parents: for it is as certain as the seasons.

It's time! Registration is open for camp. To learn more about this summer and to register, visit srvcamp.org. Questions? Email Liia at lrichmond@theschoolinrosevalley.org.